Hey, all! This is a belated Bisexual Awareness Week post (Bisexual Day being on September 23rd).

I wanted to write this post to spread awareness of the reality of bisexual people by including myself into that label. If you want to be technical, I'm "pansexual," but a lot of pansexual people use the "bisexual" label as their own as well because pansexual is, for some odd reason, difficult to explain to people. (Pan, to me, means you're into the person no matter what gender identity they have, be it male, female, trans, intersex, etc.).

But whether you want to label me as "bi" or "pan," I'm here to give a shout-out to the rainbow people who don't fit under the "straight" or "gay/lesbian" label, especially the bisexual women who choose to write lesfic because they love WLW stories and have a passion for them.

According to numerous studies, over half of LGBT people identify as Bi or Pan. (HALF!!) That's a huge number of people who identify as bisexual under our LGBT umbrella! Yet it never escapes me how much biphobia still exists, aka people who believe you are either gay or straight with no in-between. Some people think that because you're not 100% "lesbian" or "gay" you shouldn't be writing lesbian or gay stories. But I heartily disagree!

Full disclosure: I have been married to a man since 2009. He is fully aware of the fact that I am bisexual, and he completely embraces and loves my FF fiction! He is extremely LGBT friendly, perhaps in part because his mother is also bisexual. Yep, that's right, my mother-in-law has had many long-term relationships with both men and women (and is currently in a relationship with a trans man, by the way)!

I write this post for all the people who feel they are somehow not valid by being "in between." I write it for those labeling themselves as "bi" or "pan" yet have received shit for it. I'm here to say that you are valid. And whether you write MF stories, or FF stories, or MM stories, or any combinations of any of those, including those not even mentioned: you matter. Your stories matter. They are important, and they hold rank.

I, personally, decided to stick with FF romance because it's a genre I particularly fell in love with. When I was a young bisexual teenager, and all I had access to was MF romance, I longed to find FF stories that were not readily available at the time. And now that the world of publishing has opened up to more inclusivity, I have chosen to focus primarily on lesfic because that is where my heart is as the moment, and that's all that should matter.

Live your truth, my friends. Be you. Express yourselves in the ways that you feel are right for you, from your heart.

And fuck what anyone else thinks.

Thanks for stopping by.

Today I'm happy to announce the release of a new lesfic anthology that I contributed to called FIRST KISSES! 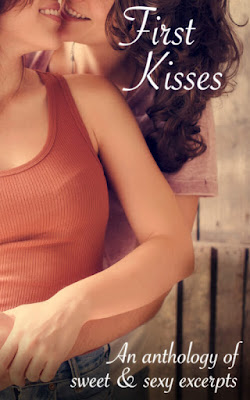 This anthology includes a whopping 55 excerpts from 55 WLW authors. Each excerpt features a Sapphic first-kiss scene from a published novel by each author. You can download the ebook in various formats via the following link:

Here is the list of all the fantastic WLW authors included:

It's a great sample of everyone's work, so check it out! And have a great weekend!

Posted by Scarlett Knight at 6:52 AM No comments: