Please join me over at Shelby Kent Stewart's blog to read my guest post on the transformative power of writing: On Being the Storytellers of Our Lives.

-SK
Posted by Scarlett Knight at 6:46 AM No comments:

CSCH Spotlight #2: The Magic of Horses

In my new contemporary lesbian romance, CITY SPIRIT, COUNTRY HEART, love interest and country girl Sophia takes main character and city girl Macy to visit her aunt's horses. I wanted to include horses in this book because of my limited but magical personal experience with these creatures when I lived in Bellevue, TX (For more on Bellevue's role in inspiring the fictional town of Lamppost, TX, --> click here <--).


I was ten years old when I lived in Bellevue, and while there, I had the opportunity to take riding lessons from a young woman who lived in a trailer on some land across the highway. She taught me how to barrel race, which was fun, but I never had any interest in doing it at a rodeo or anything.

She also taught me the difference between a horse's walk, trot, lope, and run. A walk was nice and slow, and a trot felt like riding down a bumpy brick road. The lope was nice and smooth. But the first time the horse took off in a run through the pasture with me on her back, it felt like I was flying. It was truly one of the most exhilarating experiences of my existence.

Horses have intrigued me ever since. I've never owned one, but any chance I get to interact with them, I take. How we could have domesticated such majestic creatures is mind-blowing to me. Happy horses have such a powerful, peaceful aura. Just spending a few minutes in their presence can lift my mood. Feisty, frustrated horses are intimidating to be around; they have the potential to be deadly to humans. I was so happy I had the chance to put these animals in my latest book.

Posted by Scarlett Knight at 6:06 AM No comments:

A large portion of my newest contemporary lesbian romance novel CITY SPIRIT, COUNTRY HEART takes place in the fictional town of Lamppost, Texas. If you were to look for this town on a map, you wouldn't find it. But there are two real-life towns that inspired Lamppost.

After my parents divorced when I was a kid, I found myself moving around a lot with my mother and two younger brothers. One town that we ended up living in for about a year was Bellevue, Texas. I recently had the chance to stop by Bellevue (population 343, as of 2016), and I took some pictures for this post.

One of the town's noticeable features is its powder blue water tower. I parked at the closed post office and snapped this shot: 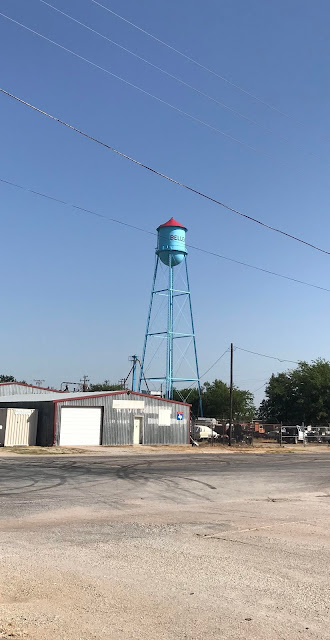 As a kid, I always wanted to climb up to the top of it, but I never had the guts to do it.

Another memorable feature of Bellevue is the fact that none of its roads are paved. They're all gravel, including the roads that go right by the school: 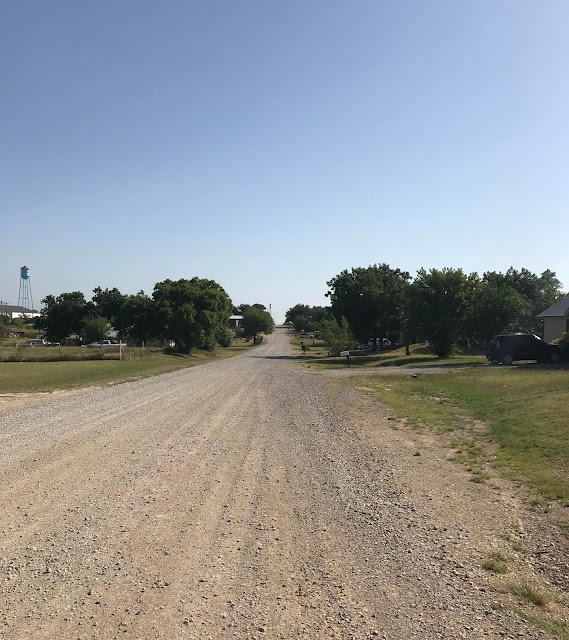 I have fond memories of walking up and down these gravel roads with my little brothers to kill time during the heat of summer. There wasn't much to walk to; at the time, there was only one gas station in operation, and only one restaurant. We used to amble down to the gas station in the afternoon and buy candy with the coins we'd earned for doing our chores. The gas station is still there, but the original restaurant closed down and is replaced by a newer one. Other than that, there are still a few churches, a post office, and (much to the disgust of most of the town) the out-of-place porn shop just down the highway. Needless to say, my brothers and I were never allowed to visit the sex store!

The second town I based Lamppost on is Jacksboro, Texas, where we also lived for a short time. It's larger than Bellevue (population 4,347 in 2016), and it has an actual town square with a courthouse. There's more to do in Jacksboro, but it's still got that small town vibe going on. I haven't been back to Jacksboro in years, so I don't have any pictures, but if you want to check out the city's web page, --> here's the link <--.

Posted by Scarlett Knight at 12:52 PM No comments: 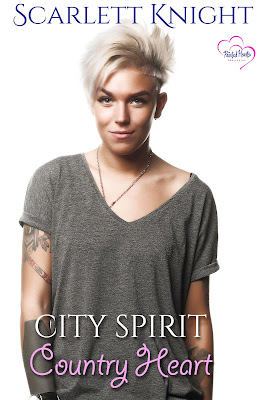 --> here's a link <-- to a little video I did on Instagram, talking about the release, and mostly thanking you all for your continued kind support. (My dog makes a surprise appearance at the end!)

Okay, now for the blurb!

When Macy gets expelled from school for putting the class bully in his place, she believes she’s done with Lamppost, Texas forever. And good riddance! She prefers the thriving diverse city of Dallas to that boring town anyway. Years later, however, Macy finds herself returning to Lamppost to do a favor for a family member. When she becomes reacquainted with one beautiful woman in particular, her feelings begin to change. Macy soon starts to discover that the very place she hoped to leave behind might secretly hold the key to her heart.

And here are the buy links! (Also, those of you who use Amazon, as you know, you can sample the first few pages for free!)

Scarlett
Posted by Scarlett Knight at 10:45 AM No comments: