March is Bisexual Health Awareness Month, and to contribute, I wanted to write a post regarding one of the aspects of bisexuality that needs more visibility.

Here's an infographic from Glaad.org from a couple of years back: 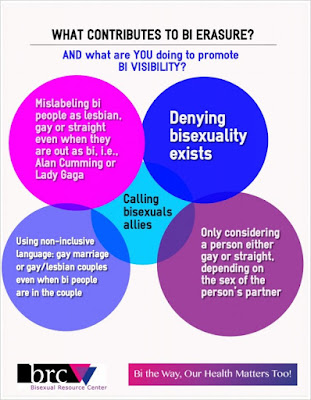 All of it is important, but for this post, I'm going to be focusing on the violet circle on the bottom right of the graphic: Only considering a person either gay or straight, depending on the sex of the person's partner

I've been married to a man for the past eight years. For many, that would mean that I'm straight. But in reality, that shouldn't erase the fact that I have been in love with and/or had crushes on a number of women in my life. It also shouldn't assume that I'll never be attracted to people of other genders, be they women, intersex, or trans, during my marriage. All it means is that I chose someone who happens to be male to marry and be my partner in life.

I think in general, it's hard for people to understand gray areas, even though they absolutely do exist. We like to label things black or white, right or wrong, gay or straight. But married bisexuals do exist. Bisexuals who are in a monogamous relationship do exist (but the bisexual stereotype of not being monogamous is for another post! ;) )

It's sad to me that bisexuals have so many health problems that seem to stem from stress because they are not accepted or understood as they are. But talking about these issues and bringing them into public awareness is the place we need to start!

Posted by Scarlett Knight at 6:58 PM