First off, I want to say a big THANK YOU to my buddy Vanessa Clark (VC) for mailing me the DVD of this film, as well as two other films which I'm planning on reviewing here on the blog. Love ya, VC!

And secondly...holy shit, what a movie! 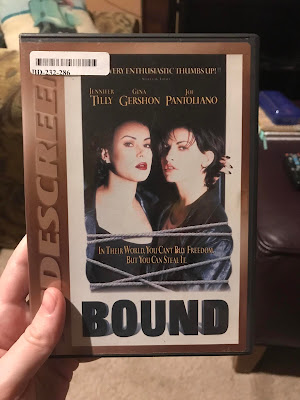 Are you old enough to remember the clout of Siskel and Ebert, and their coveted "Two Thumbs Up"? Well, this 1996 gem garnered two thumbs up, and I am old enough to respect the thumbs, so I was automatically intersted. And I should have known that this would be more than your typical lesbian fantasy thriller due to those thumbs.

But this movie is so much more than hot FF moments!

Now, don't get me wrong, I loved the love scenes. The two leading ladies have great chemistry. I could listen to Gina Gershon dirty talk in her husky, sexy voice all day. But the real story starts when we realize Jennifer's character is hooked up with a member of the mob, played by Joe Pantoliano in one of my favorite performances by him ever. You think you know his character from the get-go, but that son of a bitch is clever... That's all I'll give you on that! I don't want to give away too much of the plot because I want you to watch this movie if you haven't seen it.

But a disclaimer: this film isn't for the squeamish! It is a serious nail-biter! There were a couple of bloody scenes I simply could not watch because I was so anxious! Instead I grabbed my iPhone and played on Instagram to distract me until the scene was over. As the movie went on, the tension just mounted and mounted, and the plot thickened and thickened, and as much as I wanted to hide in my phone, I was glued to the screen. It was a movie so well done that, frankly, I am shocked I hadn't seen it before now.

After a satisfying ending, as the credits rolled, I gave a cheer when I saw that the Wachowski (then brothers - now sisters) directed it! Well, of course they did!

If you haven't seen this classic lesbian film, do yourself a favor and check it out. It made my Wednesday night way more exciting than it normally would have been, in more ways than one!

Have you seen this movie? Are there any other classic FF movies you think I should check out?


Thanks for stopping by! Won't you consider checking out my romantic lesbian fiction at www.scarlettknight.org ??

Posted by Scarlett Knight at 6:59 PM