I was watching the Steve Harvey show yesterday afternoon, and he had on some health specialists who were talking about all the things we can do to help us live longer. They discussed diet, exercise, sleep - all the usual stuff. But what caught my attention was this: apparently, having 100+ orgasms a year can add years to our lives. If that isn't a reason to have more sex, whether it's solo or with someone, I don't know what is!

It's funny because it seems like sex is the only so-called "healthy" thing that I can think of that still has shame attached to it. Why is that? If sex is good for you, if having orgasms actually increases our longevity, why on earth do we still try treat it like it's something to be ashamed of?

I recently read Alan Cumming's autobiography, Not My Father's Son, and there's a part in there about how when he was younger, he was out in the field masturbating and realized after he'd climaxed that a man had been watching him. He states in the book that that moment was a pivotal one for him, as far as shame was concerned. Though his initial reaction was embarrassment and he had the desire to cover himself, he ultimately decided not to be ashamed of what he'd done. It was normal. It felt good. Why suddenly cower at the thought of someone else knowing about it? I really liked his idea of saying no to shame. And I'm certainly glad he embraced his natural sexuality or we would have missed out on an incredibly super-sexy Emcee in Cabaret! 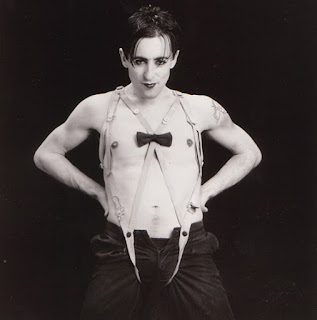