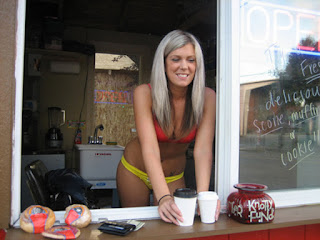 Just now on my G+ and Facebook pages, I shared a story and video on Bikini Baristas. Bikini Baristas are people who sell coffee while wearing very little in the way of clothing. Also, there aren't just female Bikini Baristas. There are some that are operated by good-looking shirtless guys.

Apparently Seattle started this off, and you can check out -->this website<-- if you're curious as to where some of these establishments are located, in and out of Seattle.

Naturally this kind of thing is causing a lot of ruckus from folks who think the scantily-clad baristas should put more clothes on. A lot of complaints come from people who have children, who are afraid of their kids seeing a nearly-naked human body.

Which brings me to my thoughts on all this: why the hell are we still making the human body such a scandal? As one of the baristas in the -->story/video<-- says, they aren't hurting anybody. So what's the big deal?

If people don't like it, then perhaps they shouldn't get their coffee from there. And really, while they're at it, they probably shouldn't ever go to the beach again, or turn on the TV, or leave the house because **gasp** they might see someone who is showing off their assets!

C'mon, people. If they're not hurting anything, and are making a living and also making many customers very happy, why try to shut 'em down?

What are your thoughts on it, blog readers?