It's December (already!?), and one of the things I like to do at the end of the year is assess which book was the best book I read during the year.

I read every genre there is, and I also read both new books and old books, so always a fun surprise to look back and see which one out of the eclectic pile grabbed me the most. This year, I hands-down have to say it was Big Little Lies by Liane Moriarty. 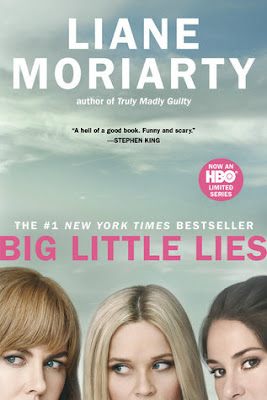 Penguin published this novel in 2014, but the book saw a surge in popularity when HBO did a mini-series based on the story. I haven't seen the show yet, but I do know that it won several 2017 Primetime Emmy Awards.

Have you ever noticed how a lot of the movies and shows that win awards are based on really good books? It's almost not fair to have a competition where a show based on book can go up against a show with an original script. Shows that are based on books already have excellent storylines, and judging from the popularity of a book, I'm sure that producers can guess the show/movie will also do well with audiences. Make it easy for everyone to succeed.

All that aside, this is a really good book. It's compulsively readable. It twists and turns and has some surprises. I recommend it to readers who enjoy fast-paced modern contemporary fiction that's both a mystery/thriller and deals with real-life issues.

This story touts itself as a mystery, but it's also portrait of domestic abuse, which normally I wouldn't be too jazzed to read about; however, the novel does such a good job at going into its characters' minds that I found myself both engrossed in the story and also feeling like I was taking a crash course in psychology.


What was the best book you read in 2017? Feel free to share in the comments!