It seems like books, TV, and movies these days are trying to promote more diversity in their stories, which is a very good thing. Unfortunately, many times the inclusion of diverse characters goes over like a led balloon because they are shallow and undeveloped. They come across more as "tokens" than as human beings we can relate to.

There is one new show, however, that I just watched, and it is doing diversity right. It doesn't tout itself as a diverse show, so I was pleasantly surprised to find it so diverse. It's a Western series on Netflix called Godless. 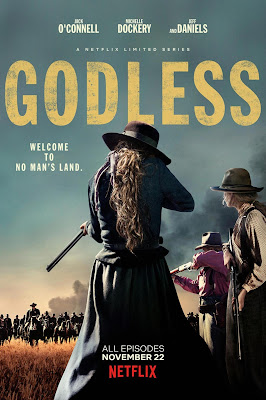 Now, obviously being a Western, one can imagine there will probably be Native Americans, and there are. And a couple of those characters are awesome. There are also African American characters that are a less typical of what you'd normally see in a lot of Westerns, which was cool. But what I found particularly surprising in a good way was the lesbian and bisexual characters.

These Les/Bi characters are not the main characters, but they are part of a very strong supporting cast. And their sexuality is done in such a way that they don't feel like tokens at all. It's truly part of who they are as people, not something that Hollywood sloppily painted on them for the sake of diversity. They aren't just thrown in there for titillating sex scenes either. These characters are strong, fascinating three-dimensional women.

Another way Hollywood tries to do diversity these days is to make someone's sexuality ambiguous. Is she or isn't she? Is he or isn't he? Are they or are they not? Well, in Godless, it's sincere, and it's obvious, not subtle at all. You don't have to guess. These characters are who they are; it's clear, and they also totally own it and live it.

So if you don't mind some rated-R level Western violence, and you're looking for a diverse show, check out Godless on Netflix. It's a limited series, so it only has one season. I thought it was a really great story overall - and it has a satisfying ending! (My beef with Hollywood and their modern unsatisfying endings is something I'll save for another post!)

Posted by Scarlett Knight at 2:27 PM